Presented as part of the Africa2020 Season, the Un.e Air.e de famille exhibition invites you to think with Afro-diasporic art from the Paul Eluard Art and History Museum in Saint-Denis (one of the General Headquarters of the season). It reveals the anti-colonial commitment of the surrealists and other artists in the museum’s collections, whose works enter into dialogue with the contemporary practices of thirteen female artists from Africa and its diasporas.

Thirteen women artists gathered around this project in order to make their voices heard through a wide range of disciplines such as painting, drawing, video, installation, photography, and sound.

Creating a dialogue between historical and contemporary works, the exhibition explores the themes of the relationship with others, memory, cartographies, migrations or even post-colonial spiritualities and commitment. 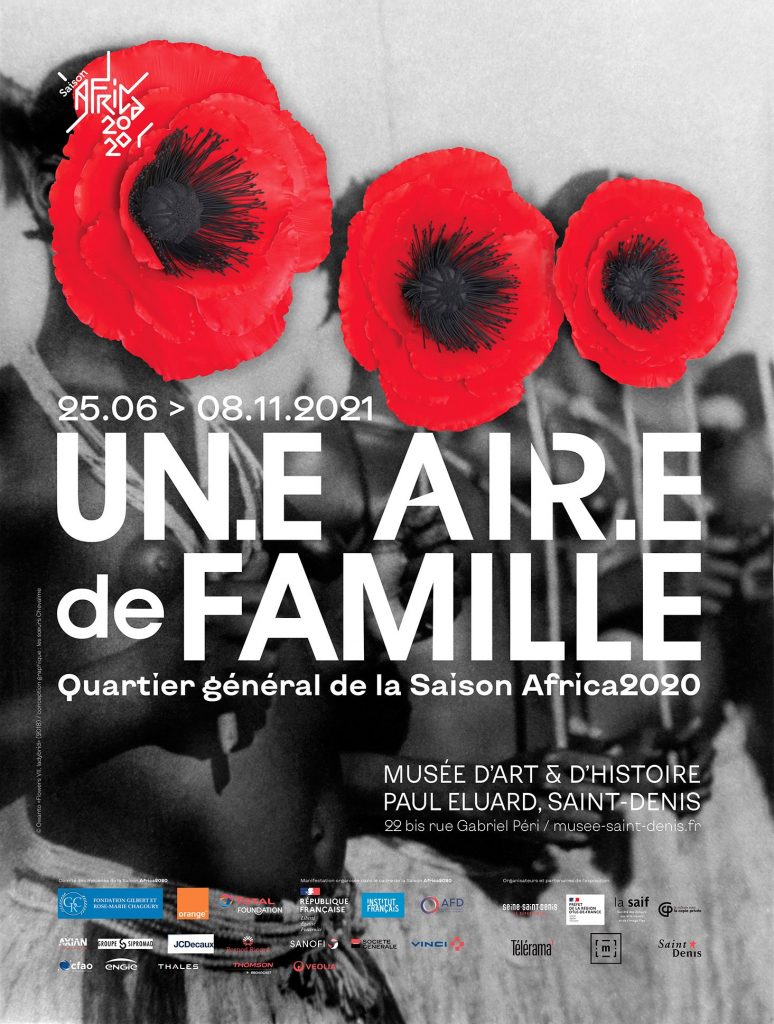 The Africa2020 Season is a Pan-African Project with a broad aim: to put the spotlight on Africa, its varied cultures, its peoples, its creativity, artistic productions, and contributions to the contemporary world in art, education, economy, politics, science and intellectual discourse.

To meet the challenge of a season dedicated to Africa and to unite African societies around common denominators, it was necessary to avoid the trap of nationalisms, regionalisms, and the promotion of linguistic and ethnic groups. Africa is the depository of a collective memory, the receptacle of civilizations with shifting borders whose actions have crossed the centuries. What binds the populations of the African continent is the awareness of living in the same territory, of belonging to the same history, of being confronted with the same challenges on African soil: access to education and health, respect for human rights, the right to free movement, self-determination and economic emancipation.

This African consciousness has created over time a feeling of belonging—sometimes tenuous—to the same territory, to the same people, and to the same destiny. Pan-Africanism, this collective ideal of political, social, economic and cultural emancipation, is the foundation of this Season. Africa2020 is inspired by the spirit of Pan-Africanism which is based on the principle of unity and the affirmation of a common future based on otherness, which the populations of southern Africa define by the term Ubuntu: I am this that I am because of what we all are.

The Africa2020 Season is an allegory of the meshing of cultural, spiritual, commercial, technological and political networks which, throughout history, link the peoples of the African continent. Bringing together all of Africa in a Season is an accepted choice. It is about creating a platform so that societies, which had sometimes lost sight of each other, can again dialogue.

It relies on the participation of local authorities that are partners of the Institut Français. The Season also benefits from the exceptional support of the Africa2020 Patrons Committee and its media partners.

In the Africa2020 Season, women are given the spotlight. The organisers considered it not only important but also necessary to ask: What is the view of African women on the major challenges of the 21st century? What are the positions and initiatives carried by more than half of the population of the African continent?

From the dissemination of knowledge to systems of disobedience, from history, memory, and archives, to economic issues, territory and citizenship, the Africa2020 Season will showcase the role of women in African societies.

The events of the Focus on Women have been underway since December 2020 and will end in November 2021.

Can We Construct a New Philosophy for the World from a pan-African Perspective?

On Contemporary And, @Joseph_Omoh_ Ndukwu wrote about about the different elements that form a city, taking inspiration from the artists featured in our publication ‘Collector’s Series: Artists & Cities’. You can read the article here: https://contemporaryand.com/fr/magazines/exploring-the-complexities-of-urban-spaces/

I had the wonderful privilege of creating today’s Google Doodle. Learn more about it here! https://www.google.com/doodles/celebrating-jollof-rice https://twitter.com/i/web/status/1588403935148380160