For a number of years, Ndidi Dike’s exhibitions have been focused on the historical relations of consumer goods that she finds in her immediate environment with the transatlantic slave trade and the colonial era. These goods feature prominently in her installations. 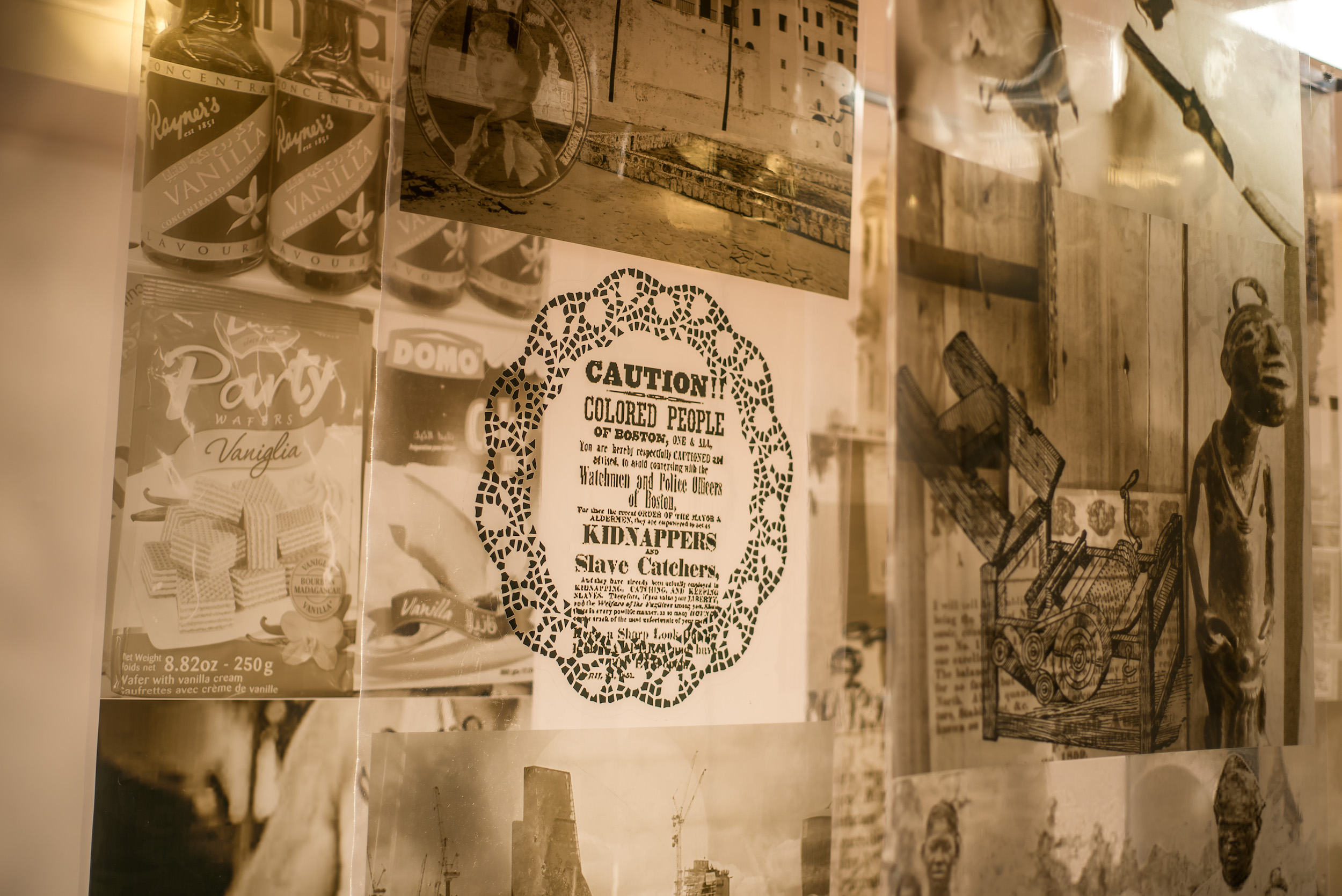 Since 2008 when she presented Waka-into-Bondage: The last ¾ Mile at the Centre for Contemporary Art in Lagos, her research and exhibitions have expanded to several aspects of the slave trade history. Some of these exhibitions are Trace: Transactional Aesthetics (2015) exhibited at Biennale Jogja XIII as part of the exposition “Hacking Conflict – Indonesia Meets Nigeria”, Exchange for Life (2017) in the group exhibition The Atlantic Triangle at Rele Gallery in Lagos, Nigeria and Constellations – Floating Space, Motion and Remembrance (2017) at Iwalewahaus in Germany.

Mid-January, at the Alliance Francaise/Mike Adenuga Centre in Lagos, Nigeria, Dike presented another extensive work of mixed media installations titled Commodities of Consumption and Sites of Extraction in the Global South furthering previous research and exhibitions of the same theme. In this presentation, she utilises familiar materials with specific symbols to trace and expand topics of labour, trade routes, artefacts and human bodies in transatlantic histories. This work reveals new reconfigured hegemonic power structures and economic dominance in the natural resource extractive industry with specific products. It combined artefacts, samples of raw and finished products with hanging image and text photocollage installations. Some of the commodities that stand out in the display are gold, cotton, indigo and vanilla. These materials are sourced from Dike’s “personal archive of images assembled through research and site visits, as well as imagery publicly available online.”

Part of my interest in these histories, despite the perception held by many that they have been exhausted, is the truth that the effects of the past survive in the present. 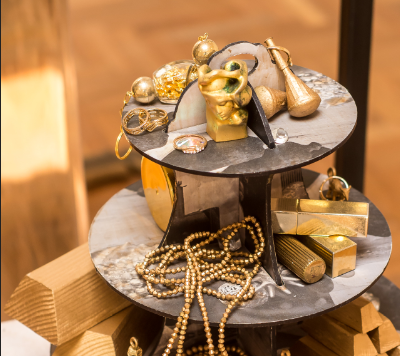 The objects and materials in the show, both products in today’s market and those related to the transatlantic slave trade are presented as potent metaphors. In her artist statement, she writes, “For instance, I use the three-tier cake stand and paper doilies that are commonplace in British high tea ceremonies as recurring modes of display in the work. The cake stand metonymically symbolises colonial powers in the transatlantic space, and their stacking of resources used to prop up and feed European industrial economies. In my work, I connect these devices and metaphors with the materiality of the products from some of the seaports and “sites of extraction” along the West African coast, commonly referred to as the Gulf of Guinea and their counter-echoes in Brazil, South America and the islands of the Caribbean Coast across the South Atlantic.”

Dike’s practice also investigates the complexities around material (dis)possession and postcolonial exploitation in the Global South. Her three-month research residency and the exhibition In The Guise of Resource Control at Villa Vassilieff in Paris focused on these topics. In 2018, she presented Mano Labour (2017-2018) at the Dak’Art Biennale’s The Red Hour, an expanded version of the work Mano Labour first exhibited the previous year in Paris as part of In The Guise of Resource Control. Mano Labour at Dak’Art featured delicate materials such as rubber hand gloves, tulle, trays, red and brown earth used to signify the natural and human resources extracted in Africa, during and after the colonial era, especially in the Congo.

Her research includes looking into commodity trading policies, trade routes and historical archives to identify and trace different resource extraction patterns that are still present. Dike writes further in her statement, “I have also been concerned with the political dimensions of commodities—their consumption, circulation, manufacture, as well as geo-political policies that underwrite the control and extractive industries that govern natural resources and appropriation in Africa. I have focused my attention on not only the Democratic Republic of Congo (DRC), but also countries such as Madagascar. Part of my interest in these histories, despite the perception held by many that they have been exhausted, is the truth that the effects of the past survive in the present.” 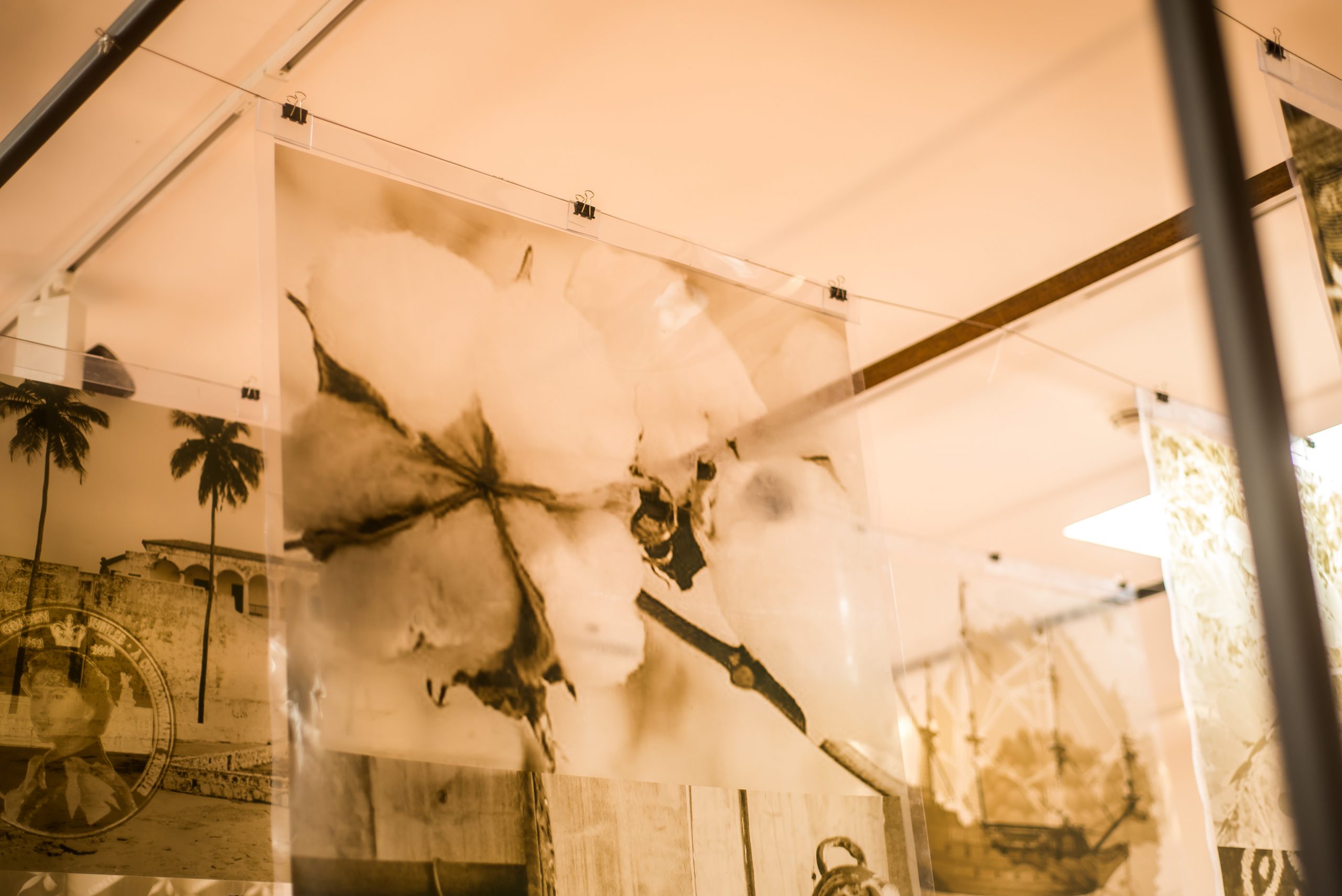 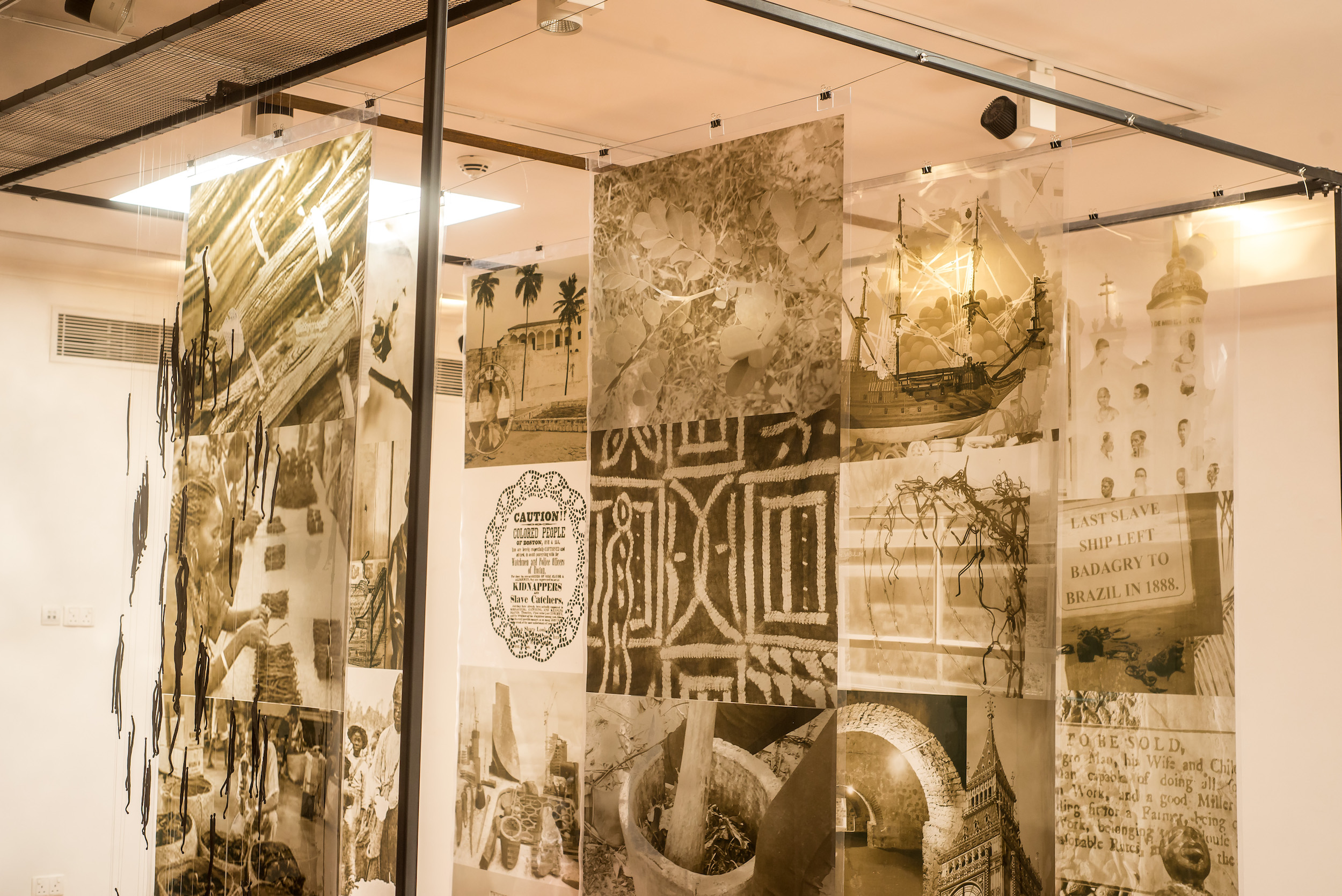 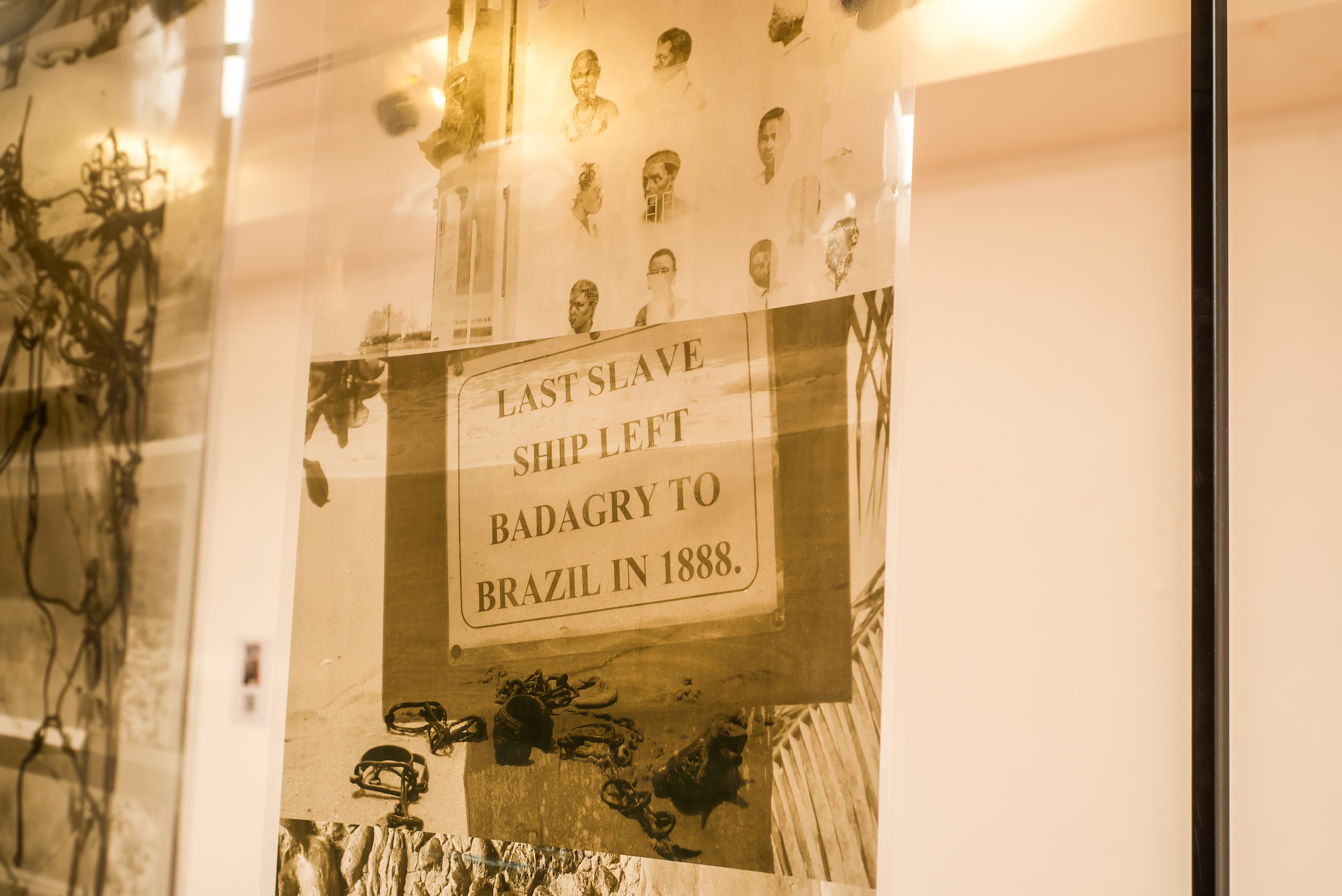 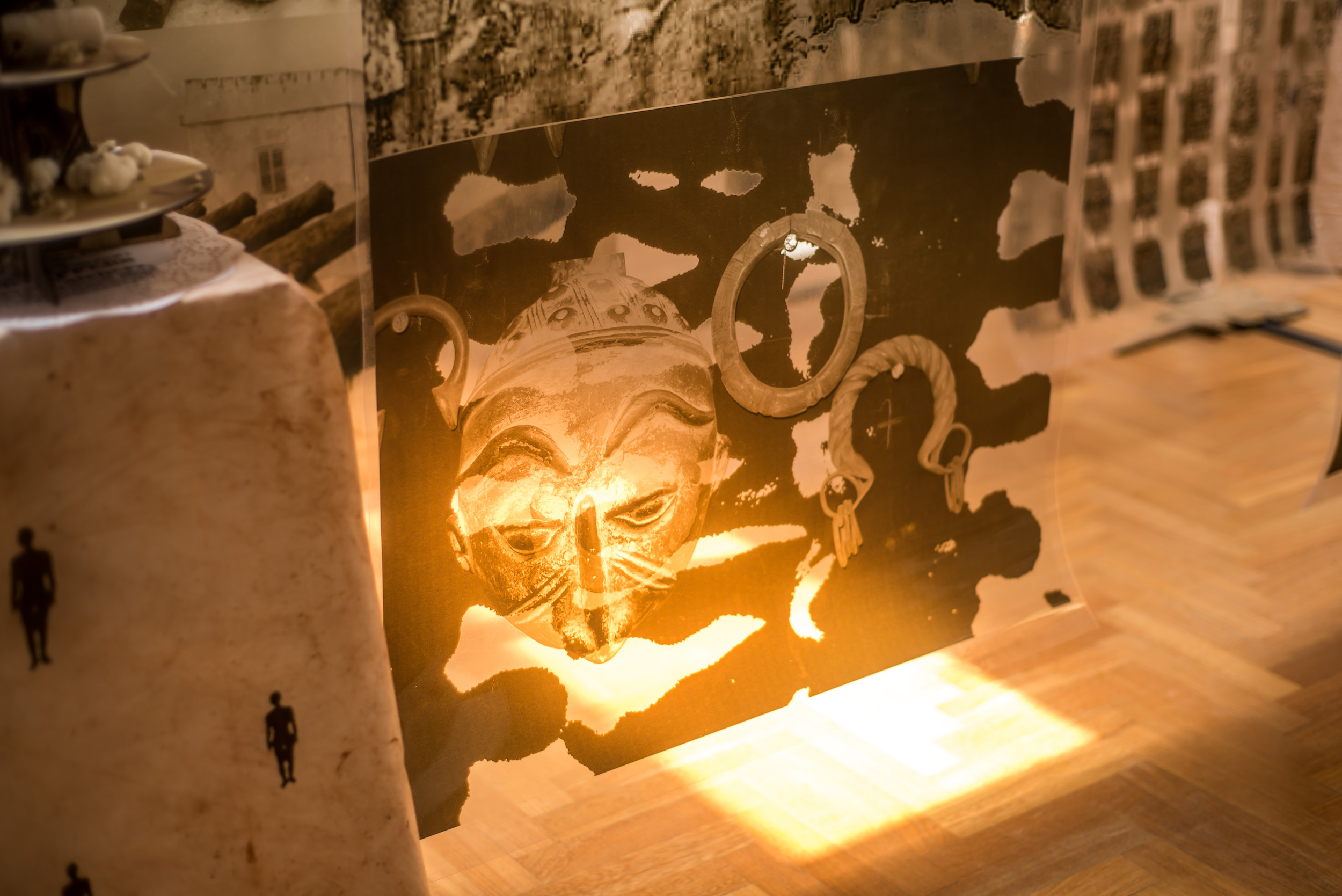 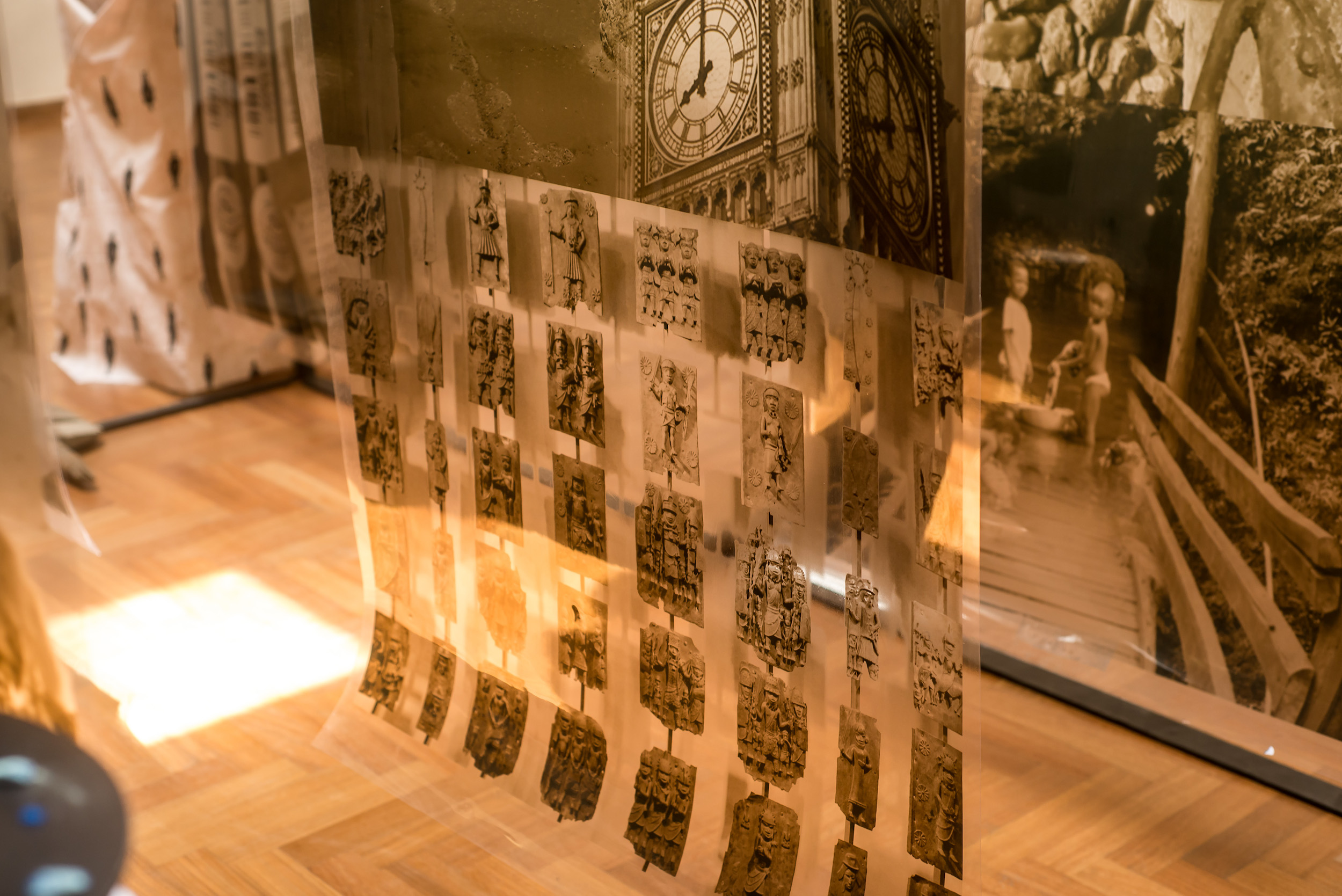 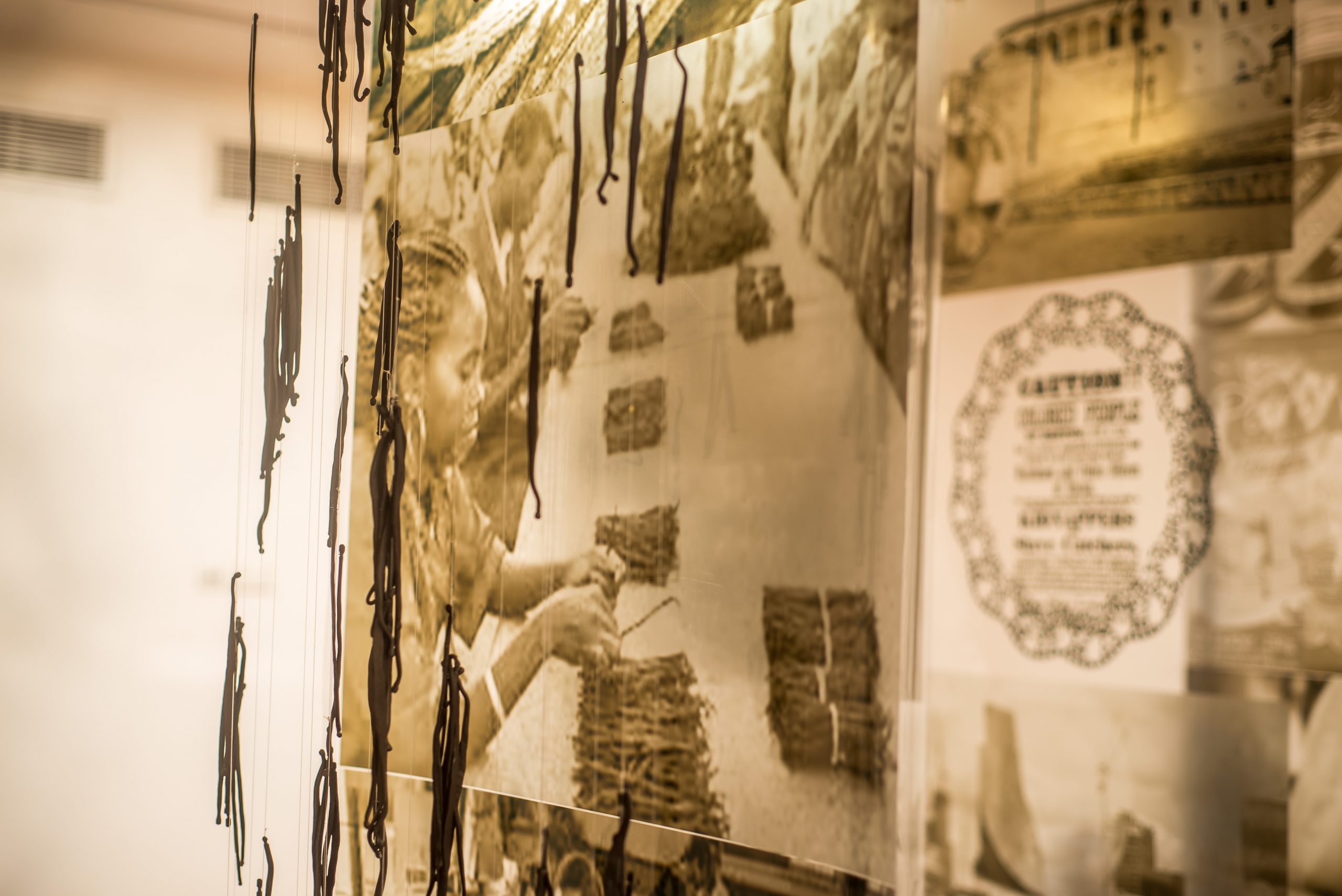 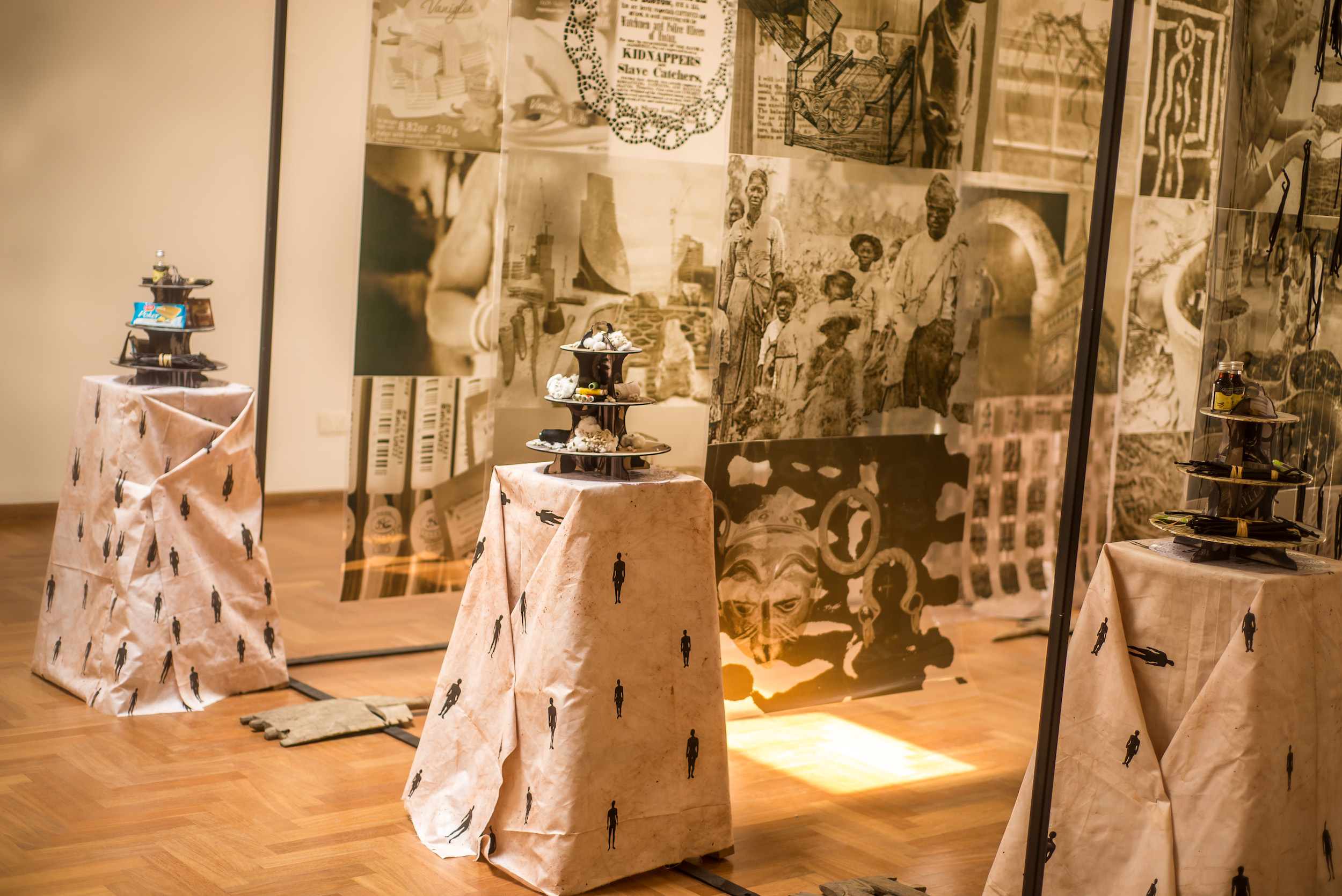 Images: Installation photos of the exhibition Commodities of Consumption and Sites of Extraction in the Global South (2021) by Nigerian artist Ndidi Dike presented by Goethe Institut Nigeria at the Alliance Francaise/Mike Adenuga Centre in Lagos, Nigeria. Credit: The Sole Adventurer/Olupitan Olusanya